The following article and video will tell you what the National Pesticide Information Center has to say about Bacillus thuringiensis (Bt).

What is Bacillus thuringiensis? (Bt)?

Bt is a microbe naturally found in soil. It makes proteins that are toxic to immature insects (larvae). There are many types of Bt. Each targets different insect groups. Target insects include beetles, mosquitoes, black flies, caterpillars, and moths.

With Bt pesticides, routine testing is required to ensure that unwanted toxins and microbes are not present. Bt has been registered for use in pesticides by the US Environmental Protection Agency (EPA) since 1961.

What are some products that contain Bacillus thuringiensis (Bt)?

Currently, Bt strains are found in over 180 registered pesticide products. Bt products are used on crops and ornamental plants. Others are used in and around buildings, in aquatic settings, and in aerial applications. These products are commonly sprays, dusts, granules, and pellets. Some of these products are approved for use in organic agriculture. 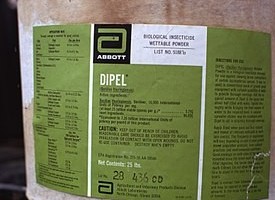 How does Bacillus thuringiensis (Bt) work?

Bt makes toxins that target insect larvae when eaten. In their gut, the toxins are activated. The activated toxin breaks down their gut, and the insects die of infection and starvation. Death can occur within a few hours or weeks.

The different types of Bt create toxins that can only be activated by the target insect larvae. In contrast, when people eat the same toxins, the toxins are not activated and no harm occurs.

Each type of Bt toxin is highly specific to the target insect. For example, the ‘kurstaki’ type targets caterpillars. The ‘isrealensis’ type targets immature flies and mosquitoes. Little to no direct toxicity to non-target insects have been observed.

How might I be exposed to Bacillus thuringiensis (Bt)?

People are most commonly exposed to Bt through their diet, at very low levels. Exposure can also occur if you breathe it in or get it on your skin or eyes. For example, this can occur while applying sprays or dusts during windy conditions. You may also be exposed after using a product if you don’t wash your hands before eating or smoking. Since Bt is commonly found in soils, exposures not related to pesticides are also possible. 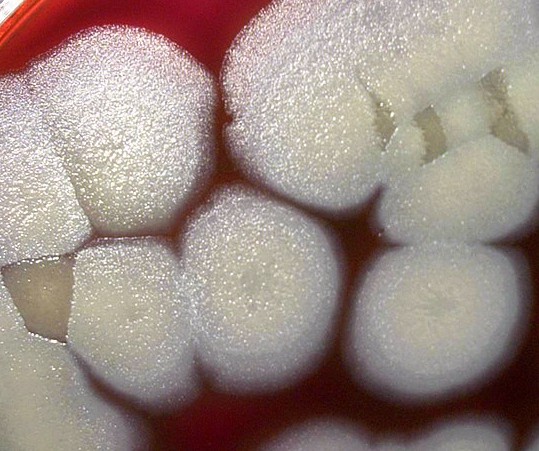 Pets might be exposed to this product in treated birdbaths or water fountains. You can limit your exposure and reduce the risk by carefully following the label instructions.

Photo depicts the colonial growth displayed by Gram-positive Bacillus thuringiensis bacteria, which were cultured on sheep blood agar (SBA) medium, for a 48 hour time period, at a temperature of 37°C.

What are some signs and symptoms from a brief exposure to Bacillus thuringiensis (Bt) Bt is low in toxicity to people and other mammals. Several studies have found no evidence of sickness or infection as a result of exposure. However, some products with Bt have caused eye and skin irritation. In one study, rats breathed in very high doses of concentrated Bt. Some had runny noses, crusty eyes, and goosebumps. Others were less active or lost weight.

In another study, people were surveyed before and after aerial applications of Bt. Most people were not affected. However, some people with hay fever reported certain symptoms. These included difficulty with sleep and concentration, stomach upset, and nose/throat irritation. Seasonal factors, such as pollen, may have contributed to some of the effects.

Scientists also evaluated whether Bt can cause allergic reactions. Researchers found that farmworkers exposed for one to four months did not experience any problems related to their airways, nose, or skin. However, further exposure showed evidence of an immune response and the potential for skin allergies to develop.

What happens to Bacillus thuringiensis (Bt) when it enters the body?

When eaten, Bt is confined to the gut. It does not reproduce, and the toxin is broken down like other proteins in the diet. Bt leaves the body within 2 to 3 days.

If breathed in, Bt can move to the lungs, blood, lymph, and kidneys. Bt is then attacked by the immune system. Levels of Bt decrease quickly one day after exposure.

What happens to Bacillus thuringiensis (Bt) in the environment?

Toxins created by Bt are rapidly broken down by sunlight and in acidic soil. Other microbes in the soil can also break it down. Bt does not readily leach in soil. It typically remains in the top several inches of soil. Bt remains dormant in most natural soil conditions. However, there has been some reproduction in nutrient-rich soils. On the soil surface, dormant Bt cells last only a few days. However, below the soil surface, they can last for months or years. The half-life in unfavorable soil is about 4 months. Bt toxins break down much faster. In one study, 12% remained after 15 days.

The photo shows Top: Lesser cornstalk borer larvae extensively damaged the leaves of this unprotected peanut plant. Bottom: After only a few bites of peanut leaves of this genetically engineered plant with Bt.

In water, Bt does not readily reproduce. A study found Bt toxins in the air were broken down rapidly by sunlight. Forty-one percent (41%) of the toxin remained after 24 hours. On plant surfaces, sunlight breaks down Bt; the half-life of Bt toxins is 1-4 days.

Can Bacillus thuringiensis (Bt) affect birds, fish, or other wildlife?

Bt is practically non-toxic and non-pathogenic to birds, fish, and shrimp. No adverse effect or infection was found in rats given large doses of two different Bt strains. There is no evidence that Bt can cause a disease outbreak among wild animals.

Little to no direct toxicity to non-target insects and other shelled invertebrates has been observed. Bt does not seem to hurt earthworms. However, the aizawai strain is highly toxic to honeybees. Other strains have minimal toxicity to honeybees.

Water fleas exposed to the kurstaki and israelensis strains showed moderate toxicity. The aizawai strains are highly toxic to water fleas. However, evidence suggests that toxicity to these non-targets may be related to impurities from the production of Bt.

Always follow label instructions and take steps to minimize exposure. If any exposures occur, be sure to follow the First Aid instructions on the product label carefully. For additional treatment advice, contact the Poison Control Center at 1-800-222-1222. If you wish to discuss a pesticide problem, please call 1-800-858-7378.

Related How To article: 3 Ways to Buy Organic Insecticides

At Amazon: Monterey B.T. Insecticide Ready-to-Spray 32oz
I will receive compensation if you click and buy this product from Amazon.