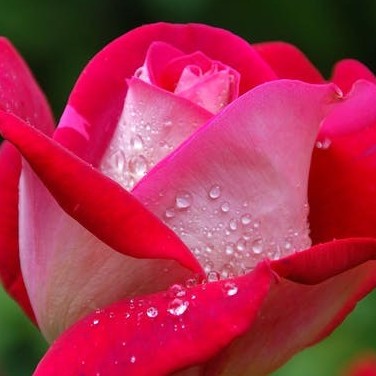 Here’s a piece of trivia I bet you didn’t know: roses are the third-largest plant family. It’s true! What is in the name of a rose? It would be extremely difficult for it to become the third-largest family if it were as difficult to cultivate them as their reputation leads you to believe.

But the more interesting point is the various members of the rose family you can find around us all the time. Like what?

Well, the “rose family” includes such plants as apples, cherries, raspberries, and many ornamental landscape plants!

Wild roses generally have two names (no not quite a first and a last name like people!). Each wild rose has a scientific or botanical name with at least two parts, sometimes more. These names are always based on the Latin language. In addition, each wild rose also contains a common name as well. For example, there’s the Rosa eglanteria — the plant’s botanical name. Its common name is eglantine.

There are times when changes occur naturally in the plant. A normally red-flowered rose, for example, may suddenly sprout a white-flowering seedling. This is called a variety. When the variety is produced artificially as a result of something a person has done, it’s called a cultivar. While that looks like an impressive word, it’s really rose-language shorthand for the term “cultivated variety”.

This cultivar could have several origins. It may be the result of a hybrid. Technically, a hybrid is when the pollen of one plant is placed on the female reproductive parts of another plant. The results are seedlings with genes from both parents.

But the cultivar could also be the result of people who actively seek to reproduce roses through rooting cuttings. In this case sections of the stem of the plant they want are grafted to another plant.

You can recognize a cultivar just by its name. They are usually only given one name (there’s not Latin-based scientific name linked with these plants). When you see a rose is named ‘Rainbow’s End’ or ‘Knock Out’ you know instantly that the final product is a man-made cultivar. You’ll also notice, as you learn more about your new-found hobby, that these single-named cultivars are always set off by a set of single quotation marks — never double!

If this particular man-made cultivar is sold in more than one country, then don’t be surprised to discover that it’s also known by more than one name.

Name of the Rose

But the name of the rose doesn’t end here! (Whew! Roses have more names than the FBI’s top listed Most Wanted!). The situation grows even more complicated if the flower is registered with the International Registration Authority for Roses, which by the way is a function of the American Rose Society.

If it is registered with this group, then it may also receive a “code name”. This code name starts with three capital letters that denote the hybridizer or the person who introduced the variety. Then, this is followed by additional lower-case letters. There’s a rose called the TANorstar. This code name is always the same — no matter in which country the rose is sold.

Names of Roses is Pretty Cut and Dry

After taking the time to describe all this, you would think that everything about the names of roses is pretty cut and dry. Oh, no! That’s just not the case, not by a long shot!

As you begin to read more, you’ll realize that names are really listed in many different ways in all sorts of publications.

Now that I’ve completely confused you and while you’re still scratching your head looking completely puzzled, we might as well plow ahead to one more point. Some older varieties of roses will have a common name as well. You can view these as nicknames. These have been adopted over the years and used so much that they’re just accepted, affectionate ways of talking about these particular roses.

Now that you’re wondering why you need to know all of this, I’ll tell you right now, sooner or later (and probably sooner) you will encounter all the names. And it very well could be the next time you open a rose catalog.

Many catalogs print all the possible names of the roses. This helps everyone to know what rose we’re talking about. The names are usually listed in the following order: fancy names; scientific names; common names and code names.

Here’s an Example of What I’m Talking About.

For the rose called “Alba Maxima’ you’ll find a listing like this. It has a fancy species and common names:

If the rose has two alternate fancy names and a code name, the entry looks like this:

With all the thousands of roses in the world and all the names just one rose can be given, it’s no wonder that the rose experts use various methods to group the roses as well. Now you know what is in the name of a rose.